NEWARK, NJ—The New Jersey Symphony Orchestra announces the 2019 NJSO Edward T. Cone Composition Institute composers and their winning works. The composers include Dan Caputo (USC) with his work Liminal, Patrick O’Malley (USC) with his work Rest and Restless, Iván Enrique Rodríguez (Juilliard) with his work A Metaphor for Power and Bora Yoon (Princeton) with her work The Encyclopedia of Winds.

The four composers will hear their music performed by the New Jersey Symphony Orchestra and participate in in-depth sessions with Institute Director Steven Mackey, guest conductor Cristian Măcelaru and industry leaders, July 15–20 on the Princeton University campus. The NJSO will present the participants’ works—as well as the East Coast Premiere of Mackey’s Portals, Scenes and Celebrations—in concert on July 20 at 8 pm at the Richardson Auditorium in Princeton.

By the conclusion of the Institute’s immersive laboratory experience, participants will have gained invaluable musical and practical feedback about writing for orchestra and how to get their music published and performed.

Raised in the Pacific Northwest, Caputo is currently a Doctor of Musical Arts candidate at the University of Southern California. His mentors include composers Ted Hearne, Sean Friar, Donald Crockett and Dan Welcher.

“There exists a period of activity between wakefulness and sleep where the frameworks we use to understand the world around us begin to break down. Liminal (2018) for orchestra explores the concept of in-betweenness from a number of angles, aiming primarily to reflect the psychological behaviors people experience in transitional states. Just as our thoughts can cycle, intrude, drift or become suddenly focused, musical materials behave in combinations of predictable and unpredictable manners relative to a number of genre contexts.”

Patrick O’Malley is a composer of orchestral, chamber and film music. He is inspired by mysterious dichotomies in nature and art, composing music that often embraces abstract worlds and emotions rather than concrete images. When writing a new piece, O’Malley considers the listener’s imagination as much as every other musical element—an admittedly and enjoyably subjective endeavor. His works have been performed across the United States and also in Europe.

Most recently, O’Malley has been recognized or performed by organizations including the Albany, Columbus and Milwaukee symphonies, Los Angeles Philharmonic’s National Composer Intensive and The American Prize. He was named Composer of the Year by the Sioux City Symphony for 2018, and he is working on a commission from the New York Youth Symphony for a Carnegie Hall premiere in 2020. O’Malley also serves as the arranger and a conductor for the video game concert series Journey LIVE with composer Austin Wintory. O’Malley is completing his doctoral degree in music at the University of Southern California where he studies with Andrew Norman and Sean Friar. He divides his time between living in Los Angeles and Lake Charlevoix, Michigan.

O’Malley on Rest and Restless:

“Several of my recent pieces concern themselves with dichotomies, or pairs of ideas that push and pull against each other. I find that I have difficulty writing unless I have at least two opposing concepts that I can somehow ‘compose between.’ Rest and Restless carries this process out with regards to emotional states—I would describe the piece as an ‘emotional landscape.’ The music slowly alternates, pendulum-like, from low angst-broodings to brighter hopes, back and forth, but without letting either mood ‘win’ over the other. These forces eventually come to a head in a tutti explosion, followed by a stark coda that, to me, feels either optimistic or dejected, depending on what mood I am in. Whenever I try to write this program note my mind keeps coming back to an image of looking out my bedroom window in Los Angeles at the evening clouds, my imagination being ignited by the simultaneously serene and troubled shapes of grey. Perhaps the music reflects that fantasy in some emotional fashion.

“The piece was originally composed as a solo for double bass for a concert I was giving at university. Without any significant pre-compositional preparations, I set about writing the piece with only a few simple goals in mind: that the piece would be overtly expressive yet interesting to listen to, that it would be manageable for a player to learn quickly and that it would demand a diverse range of a playing techniques from the single instrument. My decision to orchestrate the piece was based on the impression that the almost constant double stops and high range harmonics on the bass created a texture interesting enough to hear with an orchestral palate. I have tried to preserve the feeling of low, open strings throughout the piece, while adding a greater variety of timbres and layers to the melodic passages.”

Puerto Rican composer Iván Enrique Rodríguez’ (b.1990) music has been performed in Puerto Rico, in the US, throughout North/South America and in Europe, where, in Italy, his piece Madre Luna received 2014’s Rimini International Choral Competition prize and where his Crípticos Nos. 1, 2 & 3 garnered him one of 2015’s International Composition Competition Maurice Ravel awards. He also won 2015’s American Composers Orchestra EarShot Program, with Rossen Milanov and the Columbus Symphony giving the US premiere of his piece Luminis, which also received the Audience Choice award. Rodríguez received 2019’s ASCAP Morton Gould Young Composer Awards’ honorable mention, and his musical-social involvement was recognized by Junior Chamber International with 2014’s Ten Outstanding Young Persons of the World award in Puerto Rico.

Named a 2018 Puerto Rican Heritage Ernesto Malave Scholar of the Arts by Comité Noviembre in New York City, Rodríguez’ music is inspired by the factual human experience. His latest compositions have been focused on social justice and activism, having in their inner spirit his Puerto Rican musical heritage. This led Musica de Camara, Inc. to commission his Concerto for Puerto Rican Cuatro and Strings Orchestra, which premiered at El Museo del Barrio in New York City in 2016. Rodríguez’ works have been commercially recorded by acclaimed trumpeter Luis “Perico” Ortiz, guitarist John Rivera Pico and FourteGuitar Quartet (in a new production soon to be released).

Rodríguez received his Bachelor of Music degree at the Conservatorio de Música de Puerto Rico, studying with Alfonso Fuentes. He completed his Master of Music degree at The Juilliard School under the tutelage of Melinda Wagner and Robert Beaser and will begin his Doctor in Musical Arts degree in Juilliard’s prestigious C.V. Starr doctoral program this fall.

Rodríguez on A Metaphor for Power:

‘We hold these truths to be self-evident, that all men are created equal, that they are endowed by their Creator with certain unalienable Rights, that among these are Life, Liberty and the pursuit of Happiness.’

“This is how the Preamble to the Declaration of Independence reads. In our present-day, this sentence invites us, and certainly myself, to think about our experience in this nation, the United States of America. It is unquestionably evident that the present-day of the American experience is governed by a perceivable, and unceasingly growing, inequality, from the `abysmal separation of social classes to the renaissance of the historical but silenced racial discrimination. A Metaphor for Power, a title chosen from a James Baldwin quote, is a musical essay that attempts to address the present turbulence of ideologies, dreams and hard-hitting realities. The piece unfolds as an expedition through an expanse of troublesome experiences visited by fleeting and unsuccessful moments of hope. Through this journey of struggle, emotional sufferings and survival, the narrative is interrupted with ideological symbolisms that, in the aftermath of the affair, may have taken different meanings. As a Latino composer from Puerto Rico—and United States citizen by birth—this musical essay takes a more vivid significance as many of the unpleasant events have been part of my direct and personal American experience.”

Described as “genre-bending” by The New Yorker, and to “expect the unexpected” by KoreAm Journal, Korean-American composer, vocalist and sound artist Bora Yoon is a hybrid interdisciplinary composer who forges classical, electronic and cultural intersections using elements from a variety of cultures and centuries to formulate a storytelling through music and song. Featured on the front page of The Wall Street Journal and in WIRE Magazine for her musical innovations, Yoon’s works have been presented by Lincoln Center, Brooklyn Academy of Music, TED, the Nam June Paik Art Center (Korea), Festival of World Cultures (Poland), MADE Festival (Sweden), Singapore Arts Festival, Walker Art Center, PROTOTYPE/HEREArts/Beth Morrison Projects and universities worldwide. She has been awarded a Music/Sound fellowship with the New York Foundation for the Arts and Asian American Arts Alliance, and she has been an artist in residence at the Park Avenue Armory, The Hermitage, Ringling Museum, HERE Arts and Harvestworks. She is currently a doctoral candidate in Music Composition and the Interdisciplinary Humanities at Princeton University. borayoon.com

Yoon on The Encyclopedia of Winds:

“Inspired by the early orchestral works of Igor Stravinsky and his connection with Russian folklore and cultural mythology, The Encyclopedia of Winds is a work I sought to create as a Korean-American composer, rooted in the idea of cultural blood memory, bringing the ancient and modern elements of Korea’s political, historical and aesthetic identity together.

“The Encyclopedia of Winds is based on hexagram configurations of the I Ching, representing the alchemical interactions of the five-element system in Chinese philosophy. The hexagram—consisted of two stacked trigrams which are the symbols which flank the four corners of the South Korean flag—is rooted in Confucian philosophy, each with its own meaning, and divinatory text.

“The first movement, ‘Splitting Apart / Sweeping Changes,’ is an unstable and volatile hexagram representing the creation/destruction moment of conflict and its transformation to the other side. This movement was created using the rhythmic architecture of ancient Korean shamanistic percussion samdo-garak drum patterns, which were then grafted onto the orchestral palette as harmonic gestures. Illustratively, gestures were chosen to depict horrors found in the 10 Courts of Hell, before eventually reaching the 10th ring, the Wheel of Reincarnation. An old Korean folk song, ‘Spinning Wheel,’ churns the movement forward, juxtaposed with the patriotic anthems of the DPRK/North Korea, further juxtaposed with South Korea’s K-pop retaliation sound bites—as the conflict of past and progress, future and history come into conflict with one another, of a culture and blood that is ultimately, one, within the Korean peninsula. The brief transition between the two movements represent the Pavilion of Forgetfulness, where one drinks the potion before entering the next life.

“‘Deliverance / Return / Grace’ is based primarily on the Korean lyric song ‘Half Moon,’ juxtaposed with two of the oldest Korean folk melodies (‘Arirang’ and ‘Doraji’), in order to pull back the lens to a place before political division and conflict to a more elemental unity and unifying perspective.” 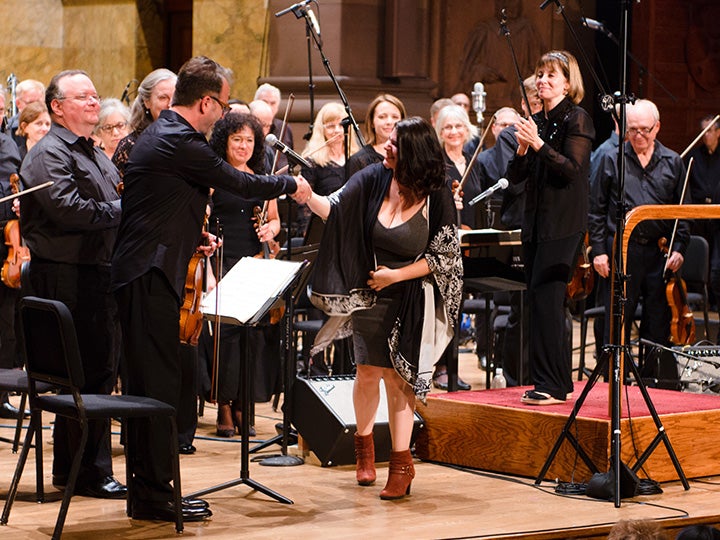