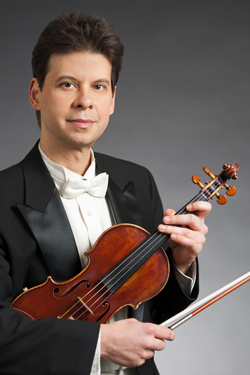 Described by music critics as an artist who “displays a solid technique, beautiful sound and great maturity” and possesses “an excellent sense of style and musicality,” violinist HÉCTOR FALCÓN has won numerous awards and competitions both in the United States and Puerto Rico, including first prize in the Sam Levenson Violin Competition and the R. J. Reynolds Career Grant award. He began his violin studies with Jose Figueroa, a member of Puerto Rico’s most prestigious family of musicians, and with Jaime Medina, a member of the Orquesta Sinfónica of Puerto Rico.

Falcón has been a member of the New Jersey Symphony since 2000, and he regularly plays with the New York City Ballet, Opera Orchestra of New York, American Symphony Orchestra and Houston Symphony Orchestra. For the past 12 years, he has toured Japan with the New York Symphonic Ensemble. A busy soloist and chamber musician, Falcón has performed in prestigious music festivals, including the Pacific Music Festival of Japan and OK Mozart Festival. He made his solo debut with the New Jersey Symphony in January 2012, performing François Dompierre’s Les Diableries; The Star-Ledger praised his “charismatic performance throughout, with fluid, silky tone and impressive precision.”

At The Juilliard School, where he obtained his bachelor’s and master’s degrees, he studied with Dorothy DeLay, Hyo Kang and Masao Kawasaki. He has attended master classes with Itzhak Perlman, Igor Bezrodny and Ruben Gonzalez.

Falcón is an avid violin recordings collector and violin historian.