An NJSO quartet performs the Lyric for Strings by the late New Jersey composer George Walker at Hoboken’s Pier C Park in an episode that will air on March 31. The quartet features violinists Bryan Hernandez-Luch and Ming Yang, violist Brett Deubner and cellist Laura Andrade, the NJSO Colton Fellow.

The series premiere is available now at njsymphony.org/everywhere. Assistant Concertmaster David Southorn performs Rhapsody No. 1 for Solo Violin by Princeton resident Jessie Montgomery—filmed with the RED Cinema Camera on the roof of Newark’s One Theater Square.

NJSO President & CEO Gabriel van Aalst says: “We are so delighted to showcase some of New Jersey’s most beautiful spaces through NJSO Everywhere, and we hope audiences will enjoy the experience of great performances in amazing places. It was fitting to open this series with Princeton composer Jessie Montgomery’s brilliant violin rhapsody, and we look forward to sharing equally striking episodes in 2021. The NJSO takes great pride in being New Jersey’s state orchestra, and we are thrilled to partner with Newark’s own DreamPlay Films, which has captured these performances with stunning cinematography.”

“I hope the audience will be impressed by this beautiful blending of incredible music and performers with iconic locations and powerful visuals,” says filmmaker Yuri Alves, who directed the series. “I love that we keep setting the bar higher and higher with the NJSO.”

DreamPlay Films CEO and series producer Igor Alves says, “These works reveal how these outstanding music performances can both transform and be transformed by environmental and filmic elements beyond the stage, while in this case, also inspiring Jersey lovers old and new.”

All NJSO Everywhere performances air at 7:30 pm on the NJSO’s YouTube and social media channels and at njsymphony.org/everywhere.

FROM ONE THEATER SQUARE IN NEWARK

FROM THE JERSEY SHORE

NJSO brass ensembles perform Poulenc’s Sonata for Horn, Trumpet and Trombone and Sousa’s The Washington Post at the Jersey Shore, filmed on the boardwalk and beach at Seaside Heights.

FROM PIER C PARK IN HOBOKEN

A quartet performs the Lyric for Strings by the late New Jersey composer George Walker on the Hoboken waterfront.

An NJSO chamber ensemble performs the first movement of Beethoven’s Septet in Montclair. 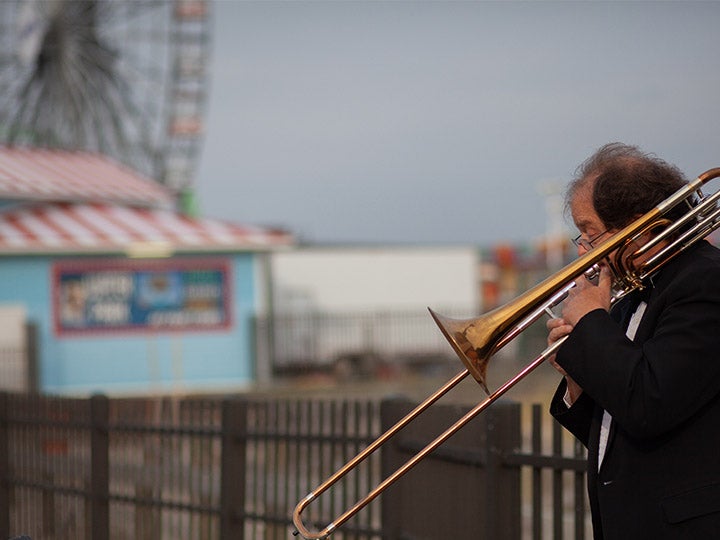 From the Jersey Shore in Seaside Heights

A brass ensemble heads down the shore for the second episode of NJSO Everywhere. Rousing works by Sousa and Poulenc fill the air in Seaside Heights.

This free event premieres Mar 17 at 7:30 pm and is available on demand after the premiere.