From July 10–15 at Princeton University, the four emerging composers will have their works rehearsed and performed by the NJSO, participate in masterclasses with Institute Director Steven Mackey, receive feedback from conductor JoAnn Falletta and NJSO musicians and have career-enriching sessions with music-industry leaders.

Mackey says: “The applicant pool was particularly strong this year. There were many scores that JoAnn and I would have liked to present, which enabled us to consider not only the quality of each work but the program as a whole as well. Saad Haddad’s Takht has Middle Eastern influences which translate into a beautifully unconventional approach to the symphony orchestra. Sam Lipman’s Song of the Bhagavad has a more traditional approach to the orchestra with lush string writing and a strong narrative. Noah Kaplan’s Forests Through Forests views traditional notions of thematic development, climax and narrative through a microtonal prism. Alyssa Weinberg’s Terza Slumbers foregrounds texture and ranges from delicate to dense.

“The Cone Institute takes a holistic approach to the elements that go into a successful career as a composer. Beyond the opportunity to polish their orchestral works with professional musicians, the composers will meet with industry leaders for insight into the practical elements of publishing and promoting their music.”

Saad Haddad is a composer of orchestral, chamber, vocal and electroacoustic music who achieves a “remarkable fusion of idioms” (The New York Times)—most notably in his work exploring the disparate qualities inherent in Western art music and Middle Eastern musical tradition. His music delves into that relationship by transferring the performance techniques of traditional Arabic instruments to Western symphonic instruments, while extending their capabilities through the advancement of technology.

His 2016–17 season features the premiere of a new work for the Albany Symphony, the premiere of Dohree by the Debussy Trio, as well as subscription performances of Manarah by the Princeton and Columbus symphonies, among others. During the season, Haddad is in residence at the Millay Colony for the Arts, Ucross Foundation, Bogliasco Foundation, Studios of Key West, Soundstreams Emerging Composer Workshop and Luzerne Music Center.

Recent distinctions include the Charles Ives Fellowship from the American Academy of Arts and Letters, S&R Foundation Washington Award Grand Prize, the Jerome Fund for New Music grant from the American Composers Forum and multiple awards from ASCAP and BMI. His orchestral works have been and are scheduled to be performed by the Los Angeles Philharmonic, American Composers Orchestra and the symphony orchestras of Alabama, Albany, Columbus, Milwaukee, New Jersey, Princeton and Sioux City.

Born in Georgia and raised in California, Haddad holds degrees in composition from The Juilliard School and University of Southern California. His music is published exclusively by Dib Press.

“The title of this work, Takht (‘ensemble’ in Arabic), describes the typical Middle Eastern musical group that consists of most of the traditional instruments used in Arabic music, including the oud, qanun, kamanjah, ney, riqq and darbakeh. Originally composed for a chamber orchestra of 15 players (one per part), this work reflects a symphonic expansion of the Western equivalent of that ensemble. Some of the instruments even share similarities between each other; for example, the ney is similar to the flute in construction, while the kamanjah sounds very much like the violin. An ongoing muse in my output thus far is the voice of arguably the most famous Egyptian singer who ever lived, Umm Kulthum (1898–1975), the ‘Star of the East.’ In this particular work, her voice, in a sense, is brought back to life as the woodwinds, brass and harp instrumentalists literally sing and play into their instruments, transforming the hall into an abstract depiction of Kulthum’s permeating presence in the lives of millions of people that continue to adore her today.”

Noah Kaplan is a composer and saxophonist from Topanga, CA. His music blends the dark energy of free jazz with Romantic lyricism in new realms of tonality. Kaplan has composed for the JACK and PRISM quartets, So Percussion and American Modern Ensemble, among others. He performs in, composes for and co-leads the art-rock band Dollshot, which recently recorded his song cycle Lalande for its second album. He is currently collaborating with writer Hampton Fancher on a sci-fi opera. As an improviser, Kaplan has performed and/or recorded with Joe Morris, Anthony Coleman, David Tronzo, Peter Erskine, Alan Pasqua, Rinde Eckert, Mat Maneri and Joe Maneri, among many others. The Noah Kaplan Quartet released its debut album, Descendents, in 2011 on HatHut Records; its second album, Cluster Swerve, follows in April 2017.

In addition to composing and improvising, Kaplan produces new classical and experimental music for Underwolf Records. He recently edited a new English edition of Ivan Wyschnegradsky’s Manual of Quarter-Tone Harmony, which will be published by Underwolf Editions in May 2017. He lives in Brooklyn.

Kaplan’s notes on Forest Through Forest

“I started composing Forest Through Forest in Pittsfield, MA, where I was living last summer in a little house on the edge of town. It began as a duo for cello and piano that was first played at Tanglewood.

“The original duo material is driving, pulsing and rhythmic, and it makes up the majority of the first half of Forest Through Forest. Back in New York, I wrote other music like off-kilter jazz, a microtonal fanfare and a warped little waltz. Then I inserted this new music into the piece so that sometimes it was like a tear in the fabric that showed a different world existing simultaneously. These worlds collide in a march that gives way to another more ethereal, lyrical dimension that blooms and intensifies until the orchestra coils into a sinister unison and breaks into silence.”

Sam Lipman lives to create music across a multitude of genres and purposes. Best known for his 2017 Oscar-shortlisting soundtrack to multiple-award-winning documentary Southwest of Salem: The Story of the San Antonio Four, Lipman is in high demand for his film scoring, orchestral and chamber commissions, jazz saxophone playing and rock songwriting/production. His most recent commission, Crone, a 30-minute ballet for chamber orchestra, was performed and recorded by Austin’s Prismatix Ensemble as the soundtrack for an upcoming Virtual Reality ballet film. His Homecoming for Baritone and Piano recently won first place in New American Voices’ call for scores. The University Interscholastic League selected his Quixosis for Tuba and Piano for its coveted Prescribed Music List. He has been commissioned for six separate new works this year.

Lipman has toured as a jazz soloist with Kurt Rosenwinkel and as a rock musician with SubPop icons Shearwater; he leads his own band consisting of members of White Denim, Okkervil River, Midlake, Mercury Rev and Polyphonic Spree. He is currently finishing his master’s degree in composition at Austin’s Butler School of Music, under the tutelage of Dan Welcher.

Lipman’s notes on Song of the Bhagavan

“Song of the Bhagavan offers a musical interpretation of the ancient Hindu classical text, the Bhagavad Gita. The Gita unfolds in a dialogue between the warrior Arjuna and his guide and God-King Krishna, as they sit on a battlefield about to join arms. The text develops through Arjuna’s attempts, through the guidance of Krishna’s moral and personal divinity, to resolve the many dilemmas of his mortality. It continues through many stages as Krishna attempts to enlighten Arjuna, by bringing him awareness of his own animalistic attachments, and to liberate him from such mortal shortcoming through an enlightened sense of detachment (Moksha). Song of the Bhagavan presents these two characters, their dialogue, their mutual struggle for dominance, and the incurable conflict between them. It serves as the slower middle movement of a larger three-movement work, based on the full Hindu epic Mahabharata, of which the Bhagavad Gita forms the middle part.”

Alyssa Weinberg’s music “succeeds at the challenge of being at once contemporary and classic” (Ouest France) and contains “heavyweight emotional dimensions” (Bachtrack). Her work is deeply influenced by collaborations with other artists from literature, dance and visual arts.

In 2014 Weinberg founded “duende,” a series for experimental music and dance in Philadelphia, with cellist Gabriel Cabezas and dancer/choreographer Chloe Felesina. Duende presents events in a variety of alternative venues, emphasizing equality between movement and music with a deep exploration into the intersection of the two disciplines.

Weinberg has participated in masterclasses with Unsuk Chin, Phillipe Leroux, Krzysztof Penderecki and Steven Stucky. She received an Artist Diploma from the Curtis Institute of Music, an M.M. in composition from the Manhattan School of Music and a B.M. in composition and theory at Vanderbilt University. Her teachers have included Richard Danielpour, Jennifer Higdon, Stan Link, David Ludwig and Michael Slayton. Weinberg began her studies as a doctoral student at Princeton University in the fall of 2016.

“Tereza Slumbers, written in 2015 for the Curtis Symphony Orchestra, was inspired by Milan Kundera’s existential novel The Unbearable Lightness of Being. I have always been interested in exploring the sonic possibilities of portraying various states of the subconscious, and in connection to this novel, I created an abstraction of the dreams of the character Tereza, in addition to the significance of sleep as a central theme throughout the novel. Formally, this piece is structured around the alternation and interaction between a philosophical ‘lightness’ and ‘heaviness,’ and the juxtaposition between these two orchestrated sound worlds represents the perpetual internal conflict of desire between these two states of existence.”

Additional information about the Institute is available at www.njsymphony.org/institute.

General-admission tickets are $15 and are available for purchase online at www.njsymphony.org/scores or by phone at 1.800.ALLEGRO (255.3476).

The NJSO welcomes new Music Director Xian Zhang in the 2016–17 season. The Orchestra presents classical, pops and family programs, as well as outdoor summer concerts and special events. Embracing its legacy as a statewide orchestra, the NJSO is the resident orchestra of the New Jersey Performing Arts Center in Newark and regularly performs at the State Theatre New Jersey in New Brunswick, Count Basie Theatre in Red Bank, Richardson Auditorium in Princeton, Mayo Performing Arts Center in Morristown and bergenPAC in Englewood. Partnerships with New Jersey arts organizations, universities and civic organizations remain a key element of the Orchestra’s statewide identity.

For more information about the NJSO, visit www.njsymphony.org or email information@njsymphony.org. Tickets are available for purchase by phone at 1.800.ALLEGRO (255.3476) or on the Orchestra’s website. 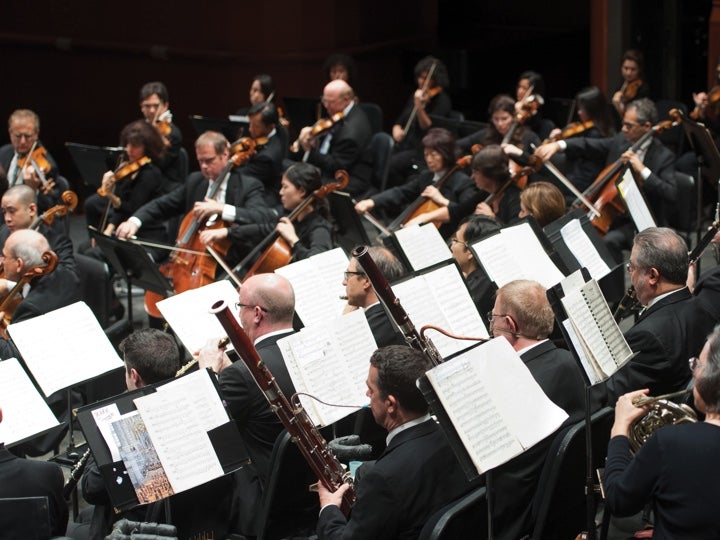