A group of NJSO donors in the Orchestra’s Amadeus Circle giving society traveled to Montreal to experience the culture of the native home of NJSO Music Director Jacques Lacombe. In addition to exploring the historic city, the travelers enjoyed a special excursion to Lacombe’s hometown, Trois-Rivières—not only did they join Lacombe for a personal tour of the Sanctuaire Notre-Dame-du-Cap, where he was a choirboy and later the organist, but they also saw the music director conduct the Orchestre symphonique de Trois-Rivières!

NJSO Board Co-Chair Ruth Lipper and Director of Development Alicia Benoist chronicled the experience as the tour unfolded—enjoy their dispatches from the trip, and scroll down for a post-trip reflection from traveler Phil Neches. 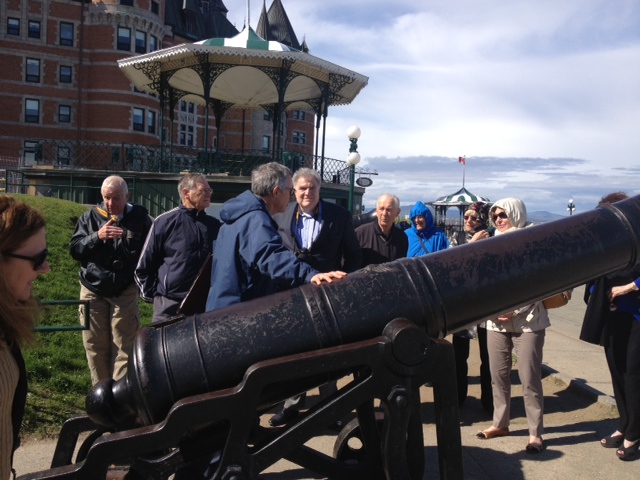 Tour guide David Mendel shows us the view from the upper town. The landmark hotel Frontenac is in the background as David explains how a Russian cannon ended up Quebec City. Despite the wind, we enjoyed a fascinating tour of the historic city.

The travelers then arrived at the place that set Jacques Lacombe on a musical path that would eventually lead him to the NJSO—the Sanctuaire Notre-Dame-du-Cap: 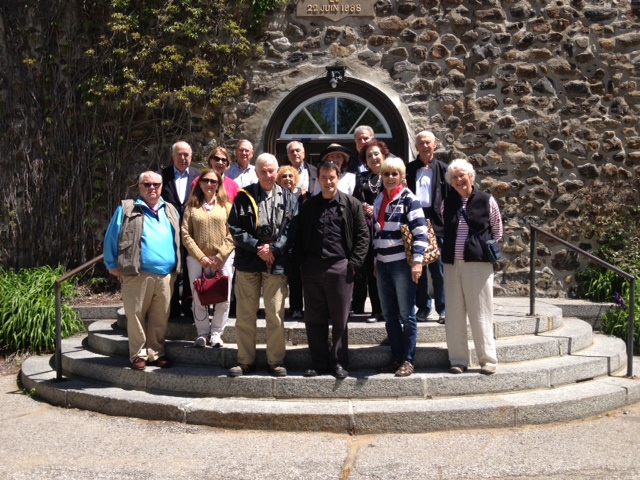 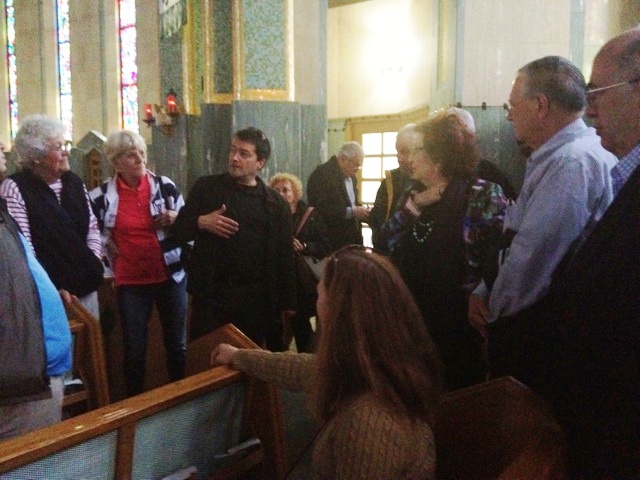 The group enjoyed lunch with OSTR Board President Jean-Marc Vanasse and spent some time with Lacombe's sister. 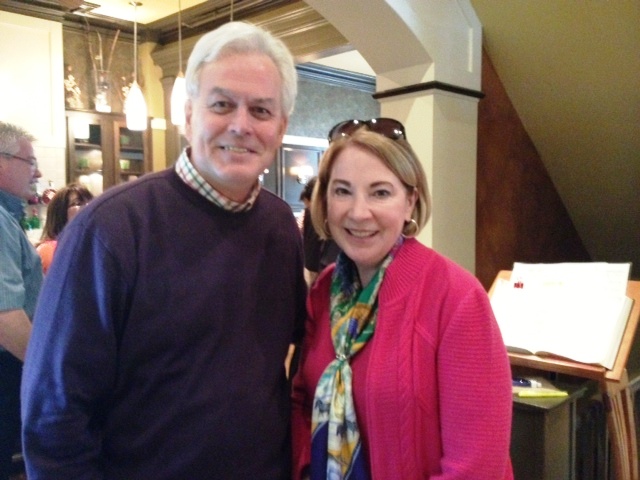 Pictured: (Above) OSTR Board President Jean-Marc Vanasse and Ruth Lipper. (Below) Jacques Lacombe, his brother-in-law André and sister Lyne.

Departed early this morning from Montreal for Quebec. Fortunately, Phil Neches and I found the cappuccino machine to fortify ourselves for the journey! Looking forward to our walking tour of Quebec!! 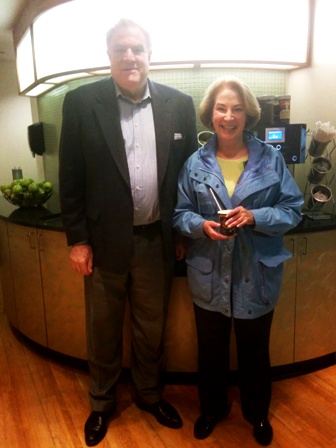 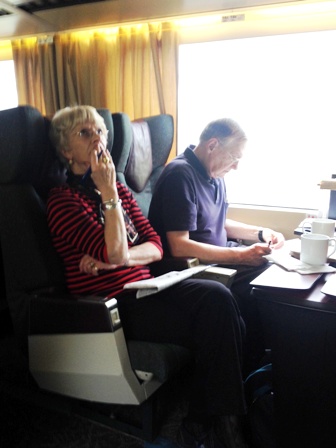 Arrived in Quebec in time for lunch prior to our walking tour. Bon Appetite!! 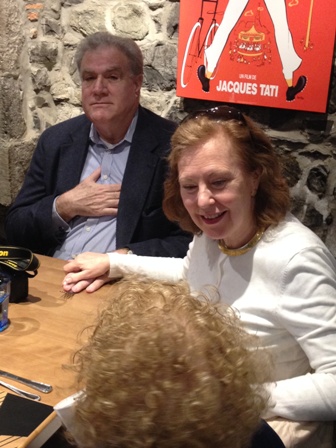 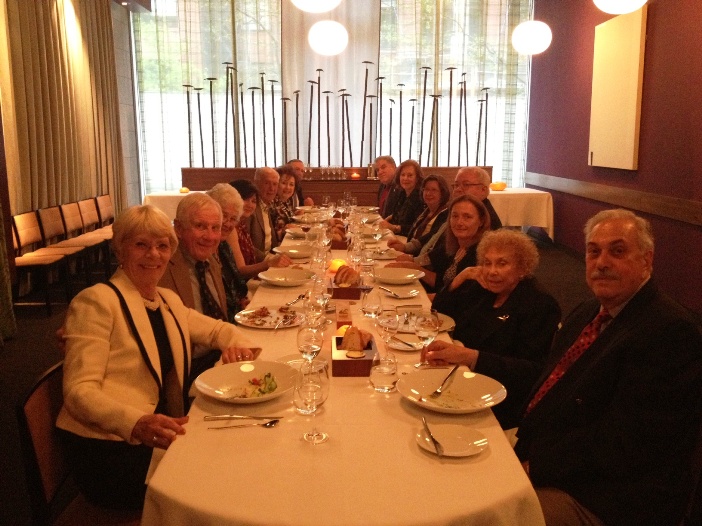 Pictured: the group enjoys dinner at Toqué in Montreal. 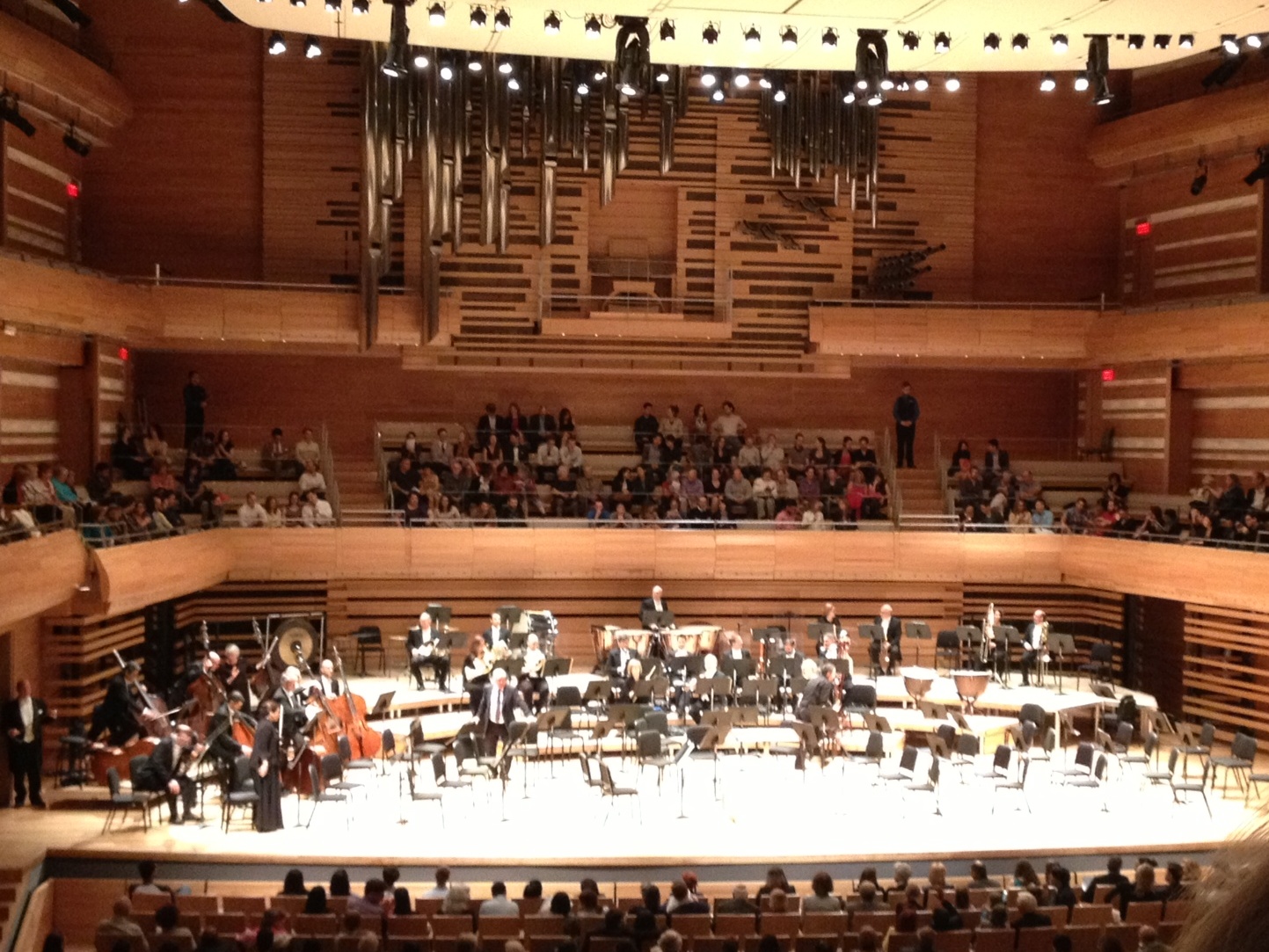 Benoist shares the view from the Place des Artes prior to the Montreal Symphony’s performance:

Beautiful concert hall with a new organ that is about to be inaugurated in a few days. It’s the pride of the city—well, depending on the outcome of tonight’s hockey game!

As soon as we arrived at the Basilica du Notre Dame, the organist commenced a magnificent improv of Amazing Grace! 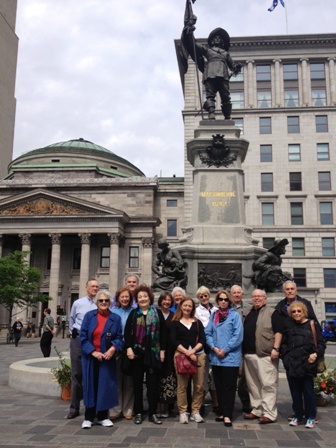 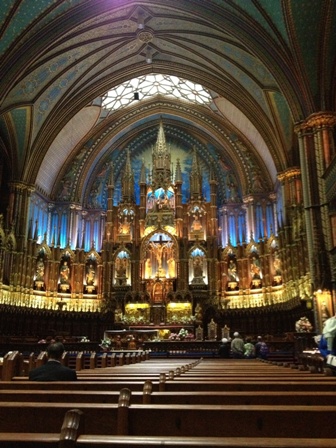 The travelers enjoyed the Chihuly exhibit at the Montreal Museum of Fine Arts: 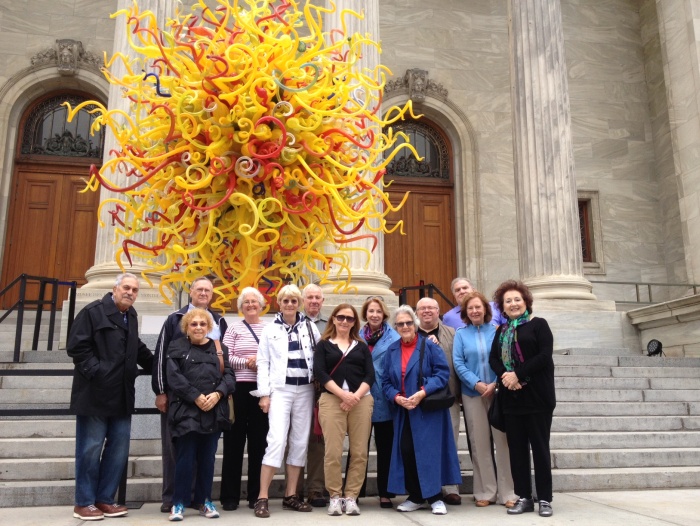 The travelers fly to Canada and enjoy dinner with Jacques and his wife, Janet, at the couple’s Montreal home. 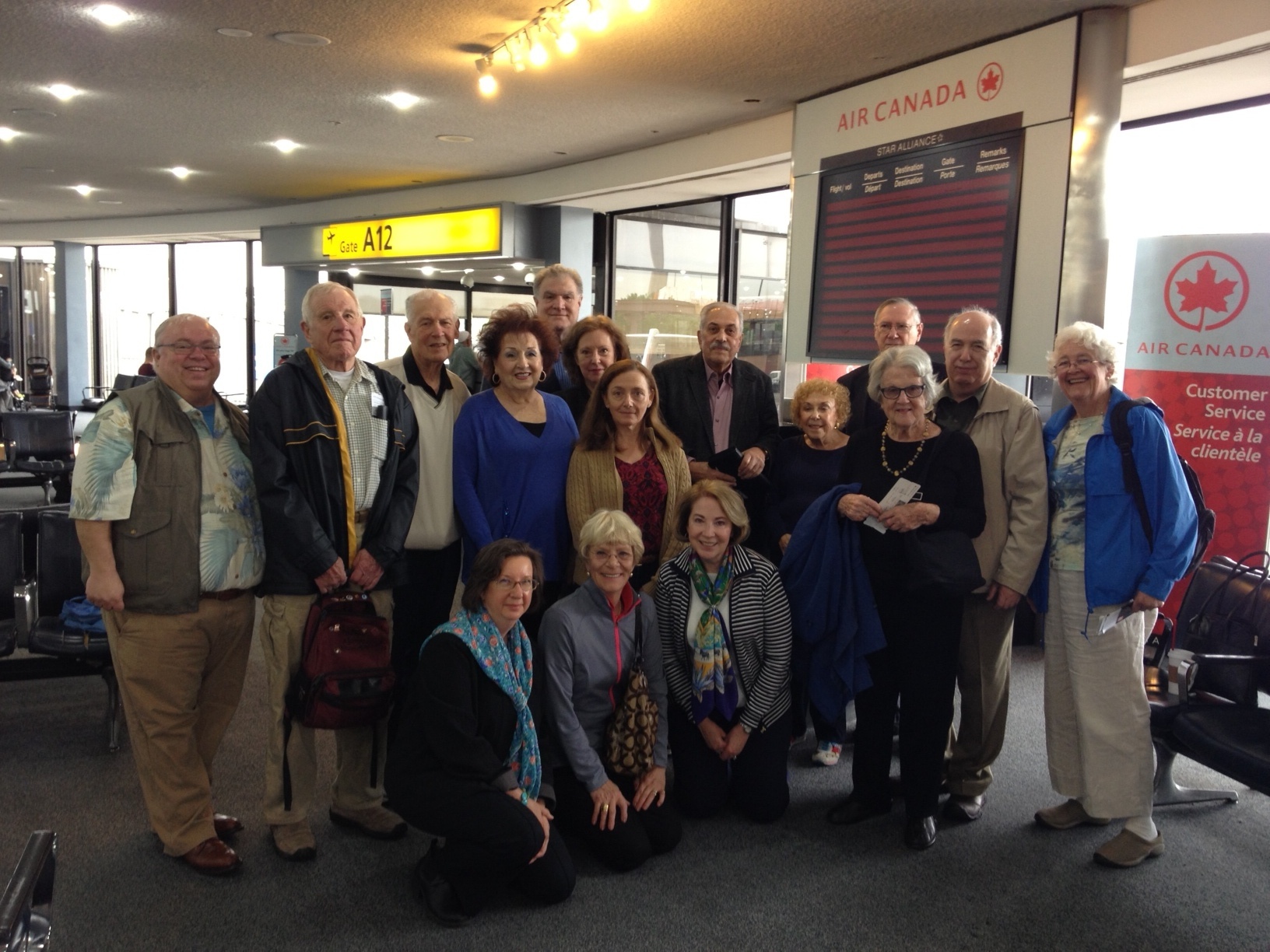 Pictured: travelers on the NJSO donor trip prepare to board their flight to Montreal.

Lipper reveals that Lacombe is not only a top maestro on the podium but also a master chef in the kitchen:

The 16 of us arrived at the Lacombes’ Montreal townhouse and were warmly welcomed by Janet and Jacques. They had prepared a selection of one dozen appetizers and Canadian wines, which we enjoyed in their enclosed garden. The weather is perfect and the company congenial—we may never come back!! 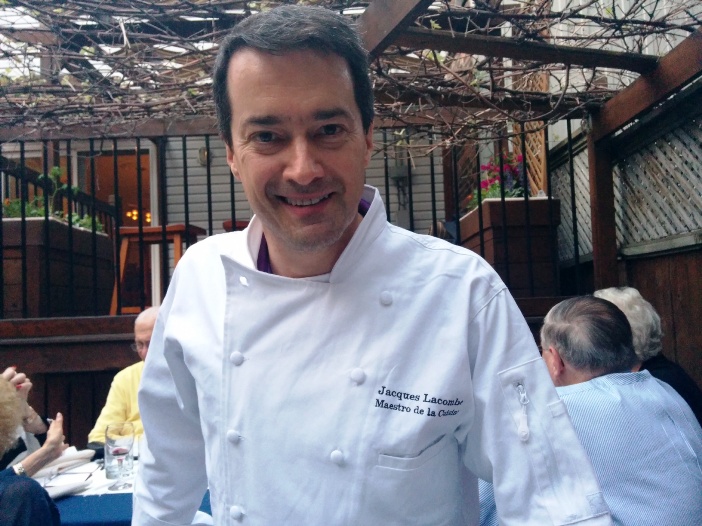 Benoist also raves about the Lacombes’ hospitality and culinary talents:

Jacques and Janet opened their home to us this evening—what an incredible dinner. Jacques is not only our chef de l’orchestre but also a chef de la cuisine! 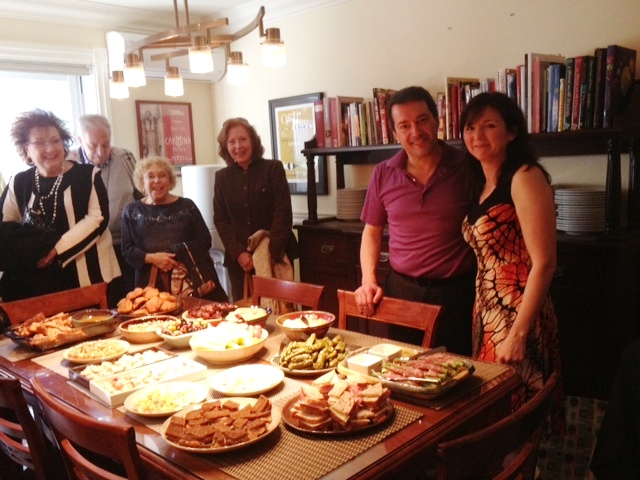 Learn more about the Amadeus Circle.

After returning to New Jersey, traveler Phil Neches shared photos and a reflection on the trip:

A group of donors and trustees of the New Jersey Symphony Orchestra journeyed into the depth of French Canada to discover the roots of our music director, Jacques Lacombe. The culmination of our journey was a concert by the other orchestra where he serves as Music Director.

Trois Rivières is a gritty, industrial city of some 150,000 souls half way between Montreal and Quebec City on the Saint Laurence River. During the peak of the Industrial Age in the late 1960s and early 1970s, it was a center for production of aluminum, paper, and textiles. With the manufacturing prosperity, the city built the grand Notre-Dame du Cap Basilica and outfitted it with a 5,500-pipe organ. Today, the basilica and its organ are all that remain of the industrial glory days.

Jacques Lacombe grew up in Trois Rivières. He began his musical career as a choirboy at the Basilica. Still in his teens, he became the organist and director of the boys choirs. Playing the organ defined Jacques musically. The 75 stops on three keyboards and a full pedal set have even more range and variety than an orchestra. The acoustics of the immense church range from 10-seconds of reverberation when empty to totally “dry” (no reflected sound at all) when the church is full of people. Jacques developed a style of extremely precise delivery of each and every note that informs his conducting style to this day.

The Orchestre Symphonique de Trois Rivières (OSTR) ended its 2013/4 season on May 24 with a program devoted to choral works. Quebecers’ love for choral music resulted in a completely sold out house.

The evening opened with Arte! a 2002 composition by Montreal composer Denis Gougeon. Modern, yet still lyrical, the piece pushed the audience ever so gently into the 21st century.

The next part of the program consisted of the final round of OSTR’s 30th annual choral competition. Three finalists gave two arias each from standard repertoire by Mendelsshon, Leoncavallo, Verdi, Vivaldi, Mozart and Donizetti. Coloratura Myriam Leblanc ran away with the top honors, propelled by a standing-ovation rendition of “Regnava nei silenzo” from Donizetti’s Lucia di Lammermoor.

After the intermission, the orchestra and chorus returned for what can only be dubbed Verdi’s Greatest Hits: choruses and preludes from Nabucco, Macbeth, La Traviata, and Il Travatore, crescendoing to the Triumphal March from Aida.

The evening concluded with prizes and toasts for Ms. Leblanc and ovations for Maestro Lacombe.

Back to In The News